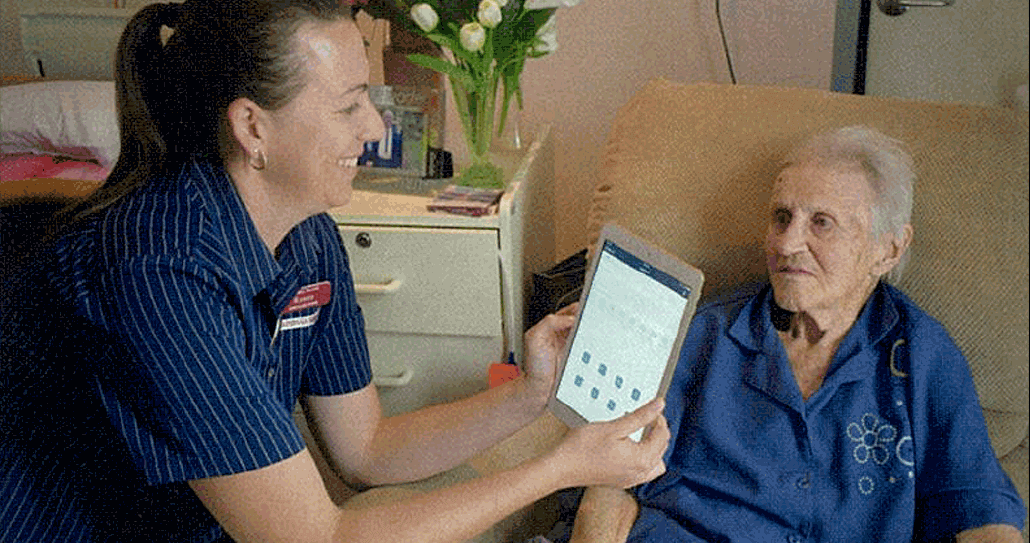 20 Jun Getting better at pain detection

Posted at 05:05h in Industry News, Press by Painchek
Share

Providers are starting to reap the benefits of a game-changing pain assessment app, writes MARIA WHITMORE.

This article was published in the May – June 2018 edition of Dementia Technology.

Staff at Barossa Village Residential Services are using the PainChek app with 16 residents.

The recent pilot of a pain assessment and monitoring device conducted as a partnership between Dementia Support Australia and the developer PainChek Limited has generated considerable interest among the aged care sector.

Curtin University research fellow and app development team member Mustafa Atee says the collaboration between the publicly-listed company and DSA was critical to advancing its use in South Australia and Western Australia, where the pilot was conducted late last year.

Since then, the PainChek app, which assesses pain in clients unable to communicate verbally, has been adopted by DSA, says Atee.

The device is now in use in both states’ DSA services, and will be rolled out across Australia to its 125 remaining consultants after its full integration into DSA’s digital platform.

The Class I medical device uses facial recognition software applied to a three-second video of a nonverbal client, combined with clinician input on their voice, movement, activity, behaviour and body, to assess the pain level in people such as those with advanced dementia, Atee says.

Atee, a pharmacist with more than 10 years of clinical experience, believes the app is critical for improving the accuracy of patient diagnoses and subsequent medication and management.

“It’s important, particularly for people with advanced dementia, because if the underlying pain is not controlled, it can translate to behavioural problems, and if people are given antipsychotics rather than pain relief, they’re not being treated for the underlying problem,” he says.

Its functionality extends beyond the point of care, and the technology is able to provide a longitudinal overview of a client’s pain, and the effectiveness of interventions.

“Whatever data is collected over a period of time is synchronised with a back-end portal and this allows for comprehensive, longitudinal assessment. We can see trends, patterns and how things are changing over time, and by doing so, eventually build a person’s profile,” Atee says.

Checks by PainChek Limited on the appropriate use of the app, which is TGA-approved for nonverbal adults, are embedded in the technology and the app’s capacity to collect and centralise data means developers can monitor its use, Atee says.

After witnessing its application by a DSA clinician, Barossa Village Residential Services’ general manager Matt Kowald had no hesitation in introducing PainChek to the 100-bed facility in South Australia.

In September last year, DSA was called in to review a partly verbal, ambulant resident with advanced dementia “who was hitting out at people with no real pattern,” Kowald tells Australian Ageing Agenda

Kowald was left convinced of the app’s merits after observing the DSA clinician’s unexpected line of investigation prompted by the app, which led to the revelation of shoulder pain as the source of the resident’s distress.

“It’s different to a paper checklist of pain, which is more subjective.”

“I said, ‘I want that’, and within half an hour I was making inquiries about it,!” Kowald says. Today, all his nursing staff are trained in its use and 20 licences have been acquired.

Another significant benefit is the increased staff awareness of the profound impact untreated pain can have on a non-verbal residents’ behaviour, says Kowald.

“We’re still very quick to say, ‘what can we do about their behaviour, or what medication can we use to manage their behaviour?’ but pain should be one of the frontline considerations,” Kowald says.

Another important outcome is that staff feel more empowered, particularly when they see clear signs of improvement in residents’ behaviour and base pain level as a result of applying the technology.

“The app produces a graph, and it’s great for staff to see whether they’re using the interventions effectively and that the trend base line keeps coming down over time,” Kowald says.

He says the clear, evidence-based sequence of steps involved in reaching a pain assessment score on the app, is also key to its reliability as an accurate, objective tool.

“It’s different to a paper checklist of pain, which is more subjective and you’re not using evidence to make your responses,” he says.

The app is being used by staff with 16 resident at present, Kowald says, with interventions already completed on six residents who are now at a manageable pain threshold. The next step for Barossa Village is to integrate the technology into its own patient management software, he says.

According to Atee, all organisations are able to integrate the technology into existing resident software, and they can then elect to synchronise their data with a centralised back-end portal.

Atee says that PainChek Limited is in the final stages of developing a consumer version of the app which can be used by non-clinical at-home carers.

A report announcing the results of the 2017 PainChek pilot was launched at Hammond Care’s International Dementia Conference in Sydney in June. Read more about that here – Getting better at Pain Detection